Jefferson Pinder – THIS IS NOT A DRILL

Performance of Jefferson Pinder’s “THIS IS NOT A DRILL” at the National Veterans Art Museums’s first Triennial and Veteran Arts Summit, May 4, 2019 Chicago Cultural Center. WIP

Dashboard awarded artist Jefferson Pinder a grant in support of float, a performance by Pinder and AJ McClenon in remembrance of the Red Summer of 1919. float commemorates the death of Eugene Williams, a young black boy who drowned in Lake Michigan at the hands of white supremacist, George Stauber. The performance featured 100 participants​ ​floating​ in ​Lake Michigan near where the teenager drowned.​

Jefferson Pinder is an artist and professor of sculpture and contemporary practices, School of the Art Institute of Chicago

Jefferson Pinder / 2014 / Dark Matter (Introduction) / Under bright police lights, break-dancers dressed in black perform a series of actions that reference the Ferguson events from August of 2014. In this work B-boys physically reference the actions from the murder that took place during August 9th and the ensuing riots. This performance pairs athletic movement with social struggle.

During the past couple of years in which identity politics have taken center stage, multimedia artist Jefferson Pinder examines 21st-century social conflicts through break dance. Working with the international b-boy crew Lionz of Zion, Pinder directs a performance that wrestles with the nature of violence and control. The performance unfolds contemporary uprisings and the forces that seek to control them. Dark Matter(s) is organized by the David C. Driskell Center for the Study of African America Art and the African Diaspora at the University of Maryland in collaboration with The Phillips Collection.

Jefferson Pinder / Thoroughbred / 2015 / Four performers step onto treadmills in a white-walled Chicago gallery space and work themselves to exhaustion. The treadmills, which are controlled by the artist, power the small group of runners to their physical limit. What starts as a performance in beautiful unison ends in dramatic fashion as performers struggle to keep up with pace.

Jefferson Pinder / Relay / 2014 / In a fierce grind, the video performance piece Relay conveys the quiet heroics of a community. Working as a meditative projection, viewers will get a voyeuristic glimpse of Somali-Americans using the action of running as a metaphor of labor in this journey. In this piece, a continuum of people will be striving to move forward.

Jefferson Pinder / White Noise / 2008 / Afro-Cosmonaut/Alien (White Noise) is an escapist video narrative that ends in destruction when the protagonist plummets back to earth after a mystical space journey. Like Icharrus, the epic fall comes after reaching a brilliant zenith that is both mesmerizing and lethal. This white-faced Butoh inspired performance is a crude metaphor of the civil rights legacy. Taking cues from experimental films, I plant myself within my work and ask the viewers to watch the images of propulsion and power.

Utilizing time-lapse animation, White Noise consists of over 2,000 photographs. Each frame of this piece is an individual pose. All together they form a continuous flow of activity. The sequence, which happens in exaggerated time, draws attention to the physicality of the performance and the identity of the figure represented.

Jefferson Pinder / Zwazo – Koulév / Featuring Haitian dancer Yonel Charles, this short video project was done during a residency at Jakmel Ekspresyon, Haiti. This sketch is based on abstract movements representing two disparate symbols of voodoo tradition. In Kreyole, Zwazo, translates into bird and Koulév, snake. For this poetic dance, Charles embodies both spirits. In a central location in Jacmel, Yonel embodies the most powerful Loa (supreme spirit), known as Damballah, the serpent god. In this performance he and the snake (or Koulév) become one.

In visual contrast, Charles is representing the mighty spirit of the soaring bird, Zwazo, which represents soul freedom and flight of the imagination. Paired together, this two-channel installation becomes a force of nature and an unhindered devotional dance meditation.

Jefferson Pinder  / Overture (excerpt) / In 1913 WEB DuBois successfully tried his hand at producing a theatrical work about the ‘ten thousand year history’ of the black race’. His pageant titled The Star of Ethiopia gave the world yet another way of looking at his genius. Mixing inspiration from opera and classical theatre with the stylization of spirituals, DuBois set out to unabashedly educate the masses about the proud and complex history of the black race.

“My installation begins with the limited extant photo documentation of the four pageant productions. Taking cues from the multiple Star of Ethiopia scripts found in the University of Massachusetts Credo web database and flowing with the theme of the exhibition, ‘DuBois in Our Time’, I created a two-channel multiple abstract video short, of an iconic moment found in the pageant. Primarily focusing on the characterization of the ‘Veiled Woman’, this piece is a stylized interpretation of the first part of the pageant. DuBois titled it the ‘Gift of Iron’,  the mystical ‘veiled woman’ as a symbol of black womanhood, she presents fire and iron to the “savages” of Africa to afford them a new life.”

“Embodying written documentation, I want to create a powerful movement incorporating Du Bois’s love of Wagner (and music), strength of the black woman, and public theatrics. Introducing a contemporary score, this is an interpretation of a fragment of DuBois most ambitious works.”

Culminating a week-long residency at the University of Mass – Amherst

Artists Adam Pendleton, Nadine Robinson, Jefferson Pinder, Jeffrey Grove, and Hank Willis Thomas, along with Kenya Evans and Jabari Anderson of Otabenga Jones & Associates, discuss their participation in the exhibit After 1968: Contemporary Artists and the Civil Rights Legacy. The exhibit and their art reconsider the pivotal time in American history and explores its relevancy to and influence on a new generation. 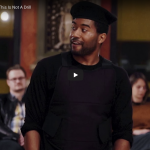 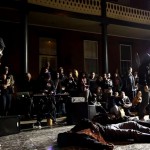 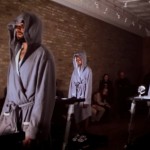 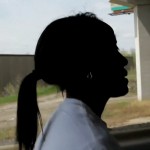 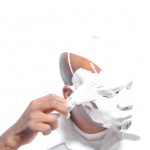 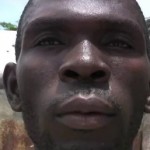 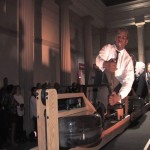 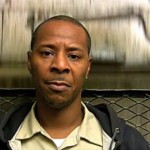 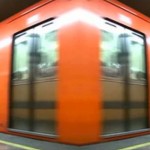 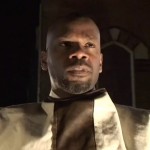 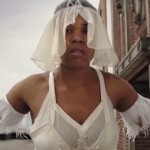 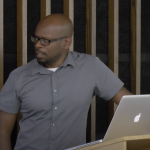 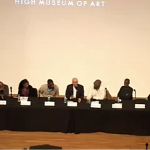 Interdisciplinary artist Jefferson Pinder gained national attention with the exhibition Frequency at The Studio Museum in Harlem in 2006. In this exhibition was Car Wash Meditations, a short video of a car rolling through a carwash to the music of Nas’s “Made You Look,” while explosive colors of soap manifest as action painting on the screen. The combination of sound and image is set against a profile of a Black man, Pinder, seated in the car. Such is the complexity of Pinder, who intuitively applies his knowledge of music, imagery, and performance to address complex issues of race, ethnicity, and class. Unfortunately events, recent and historical provide Pinder with no end of material that he powerfully and poetically composes in compelling performances. Troy Patterson of Slate Magazine, writing for Southern Living, praised Pinder’s work saying its impact “lies in its ability to provoke meaningful dialogue.” The Washington Post compared his early work to that of Jacob Lawrence saying, “Like all Pinder’s best videos, it is a simple conceit, simply realized. But it speaks simply of the same complexities that Jacob Lawrence did.”

Pinder says of his work, “Inspired by the symbiosis of music and the moving image, I portray the black body both frenetically and through drudgery in order to convey relevant cultural experiences. To get to the essence of this conversation, I place no restrictions on the tools that I employ as an artist, working with materials as disparate as neon lighting and found items in my sculptural stylizations. I find ways in which reclaimed materials convey rugged histories, relating them to a Black American experience.”

Pinder’s recent series of performances and video explore the horrific events of Red Summer of 1919. A crew of selected performers led by Jefferson Pinder brings disperse historical locations and events back into focus by re-enacting the turbulent events of the Red Summer of 1919 . Videos and performances including Float, Elaine, Fire and Movement, THIS IS NOT A DRILL and Sonic Boom were enacted at the location of each violent event and comprise Red Summer Road Trip. The performance documentation reflects on racism and trauma, with the hope of inspiring dialogue about history and the potential of change.

Jefferson Pinder (b. 1970, Washington, D.C.) has produced highly praised performance-based and multidisciplinary work for over a decade. His work has been featured in numerous group shows including exhibitions at The Studio Museum in Harlem, the Wadsworth Athenaeum Museum of Art in Hartford, Connecticut, The High Museum in Atlanta, the National Gallery of Art, Washington D.C. and Tate Modern in London, UK. In 2017, Jefferson Pinder received a Guggenheim Fellowship; he also received a 2016 USA Joyce Fellowship Award in the field of performance, and in 2017  the Moving Image Acquisition award.

Jefferson Pinder received a BA in Theatre and MFA in Mixed Media from the University of Maryland, and studied at the Asolo Theatre Conservatory in Sarasota, FL. He was an Assistant Professor of theory, performance and foundations at the University of Maryland from 2003-2011. Pinder is currently Dean of Faculty, Professor in the Contemporary Practices department at the School of the Art Institute of Chicago.