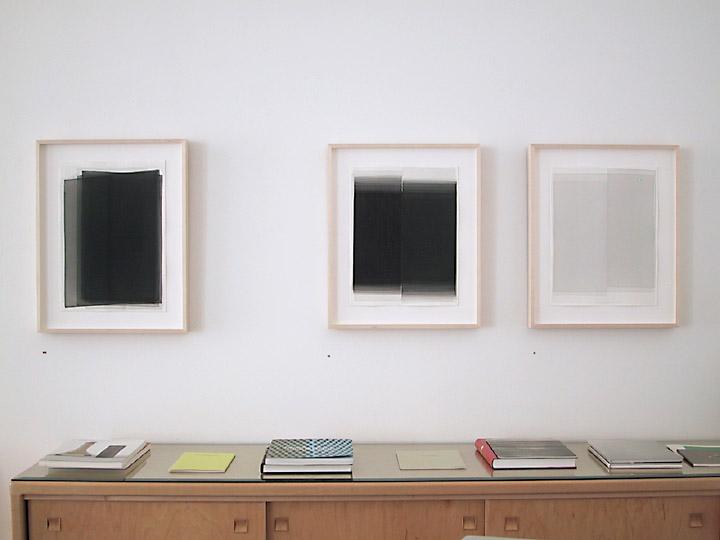 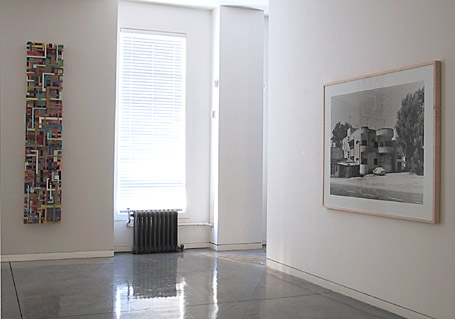 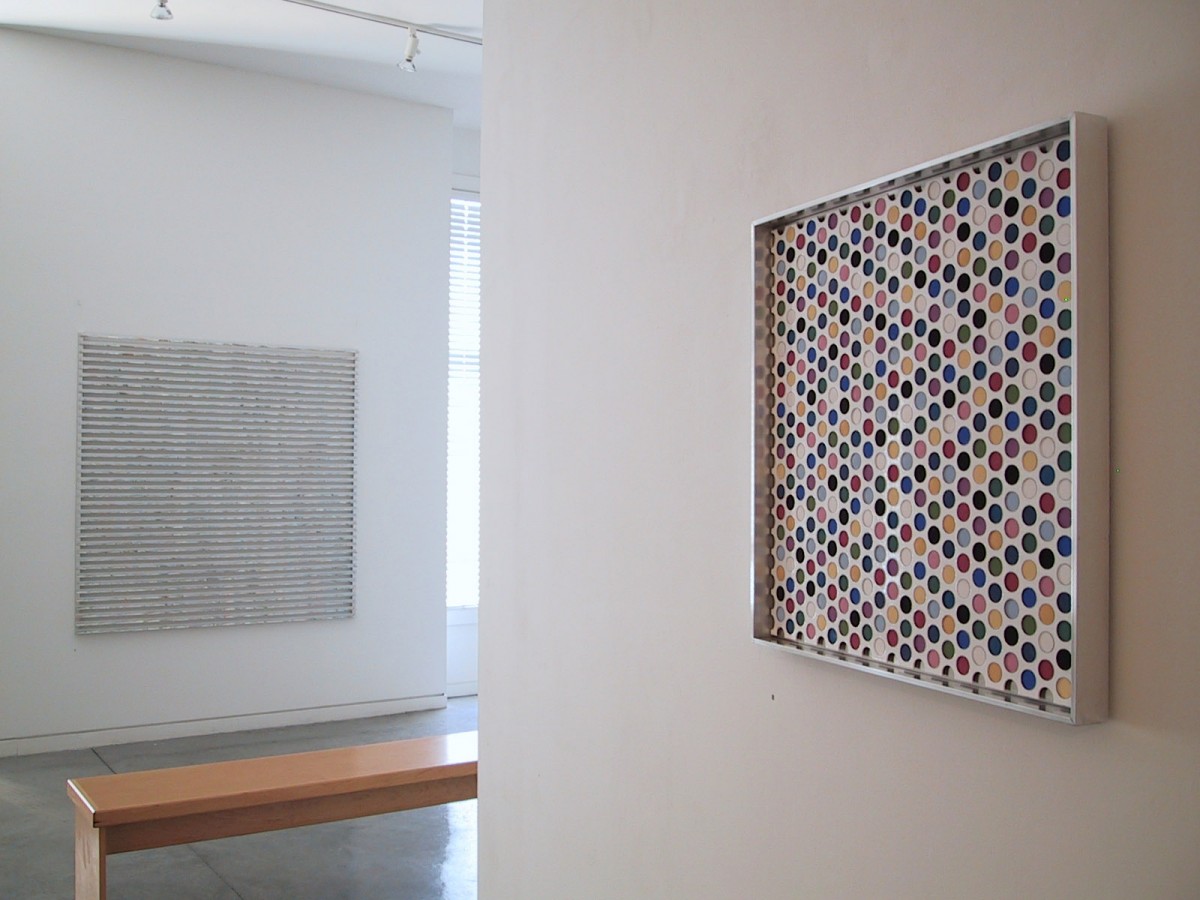 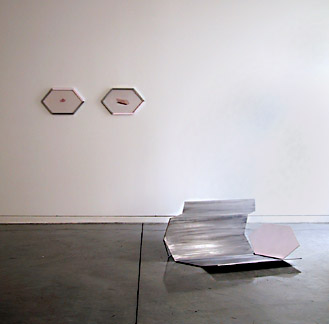 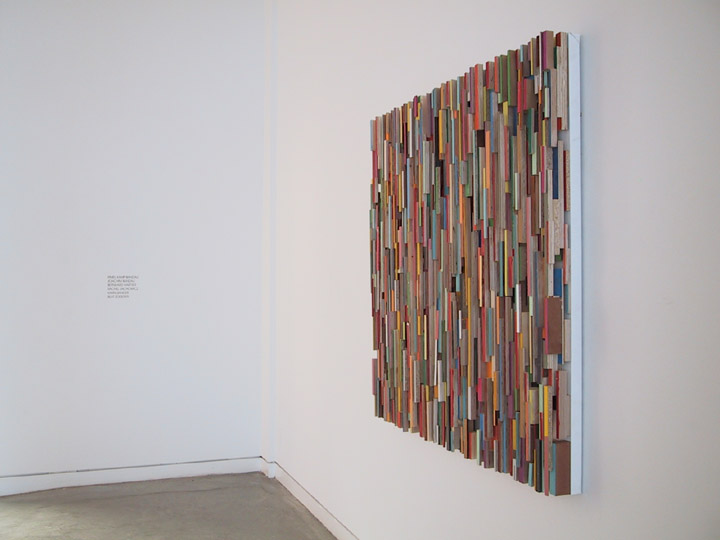 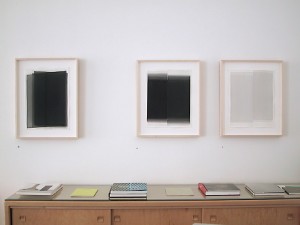 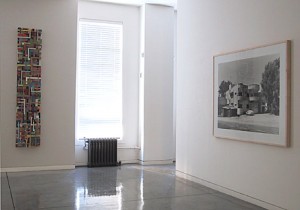 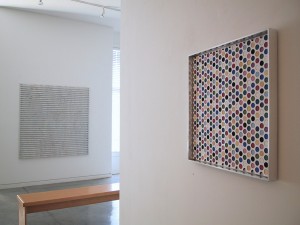 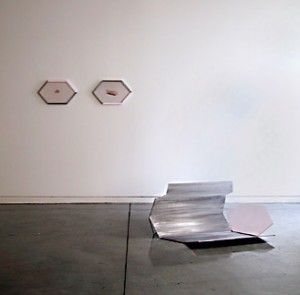 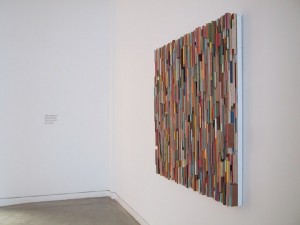 I have been asked on many occasions why I do not curate exhibitions with, or around a theme. In fashioning this exhibition I was again questioned, how do these artists relate to each other? The answer is, they don’t. In considering a theme exhibition, I imagine the artists, and work assembled in conformity to the concept of the theme, however I developed this exhibition in the opposite manner, my theme is arbitrarily derived from the artists selected. It is a stretch to relate the work of Rachel Lachowicz, who provides feminist, modernist critique with the photographs of Irmel Kamp-Bandau, who created a photographic archive of Tel Aviv architecture built by Jewish exiles; and how do the constructions of Beat Zoderer, who playfully uses the products of contemporary industry to critique and reinvent, relate to Joachim Bandau’s symbolically layered Black Watercolors? Tough, hence the open-ended construct of Structure – political, physical, psychological, geographical, or ontological. That I bend the artist’s intention, the historical context, and the viewer’s understanding is inevitable, with or without thematically relating the works – anyway it is my fifth anniversary, and I wanted to exhibit the work of these artists!

German artist Irmel Kamp-Bandau (b. 1937) will present large format photographs of buildings in Tel Aviv built between 1930 and 1939. The architects and civil engineers were Jewish European immigrants primarily from Germany who were banned and prevented from working, teaching, or living in their native country, or any other European country. The Eastern Europeans immigrants were similarly escaping pogroms, and rampant anti-semiticism. These buildings represent the largest urban ensemble of Modern Architecture ever built; Kamp-Bandau became concerned with documenting this history before demolition or elements destroyed the buildings. A meticulously crafted archive including plans, alterations to the structure, architect’s names and biographies accompany each photograph in the book, Tel Aviv, Modern Architecture, 1930 – 1939. For this scholarly project funded by the Institut für Auslandbeziehungen, Stuttgart, and Architekturmuseum der Technischen Universität, München, Kamp-Bandau researched and documented on location in Tel Aviv over three years. This project will be explored more extensively in future exhibitions, but it is a rare historical glimpse of modern architecture as practiced by Jewish professionals banned in Nazi Germany.

PSG will exhibit the Black Watercolor Paintings of German sculptor Joachim Bandau (b. 1936) in his first West Coast exhibition. Bandau became synonymous with “Ground Sculpture”, between 1960 and 1980. Bandau distinguished himself from American artists Carl Andre, Richard Serra, and Bruce Nauman by producing revolutionary lead and steel sculpture. Throughout his artistic career, drawings always co-existed with the sculpture, sometimes and document, often independent. In this exhibition PSG will exhibit Bandau’s black watercolors, first exhibited in 1987 at the Museum Morsbroich in Leverkusen. A precursor to his hatched drawings of the seventies, these paintings are drawings that resonate the lines of his sculpture, a slow precise brushstroke of various width and pigment densities layered on heavy paper. The effect is the slow forming of depth, or volume, veils of pigment dilutions defined in layers by fine water lines. Bandau’s watercolors are large in scale 5 x 4 feet, however for purposes of this exhibition small format watercolors will be on view. Joachim Bandau will have a one person exhibition at the gallery September 2002 with large format watercolors, and steel sculpture. Bandau’s works are included in numerous public spaces and collections including the Suermondt-Ludwig-Museum, Aachen; Museum van Hedendaagse Kunst, Antwerpen; Kunstmuseum Kupferstichkabinett, Base; Judisches Museum, Berlin; Städische Kunstsammlungen, Nürnberg.

It is difficult to separate German painter Bernhard Härtter from his paintings which he refers to as “Kythera” pictures. These paintings exist as a dialogue between object and artist, Härtter always questioning the status of the work itself. “The paintings were created against creation.” The structure is aluminum slats secured to an aluminum frame. The substance, oil, is heaped upon the supports transforming themselves into shelves of substance. “I see the little dirt-heaps as the ‘waste-products’ of high-flying ideas (feathered palettes) – ‘flapping ideas all around’ – that get rid of their colors in a picture: remainings, heaps, hills.” The paint develops a structure within the confines of its structure, always a question of the “potential limit”. PSG will present Bernhard Härtter in his first American exhibition. Recent exhibition include Portikus, Frankfurt, Kunstraum Munich and the Kunstverein, Freiberg. Residencies include the City of Paris and the Chinati Foundation in Marfa, Texas.

Los Angeles based artist Rachel Lachowicz is known for her casting of lipstick, face powder and eye shadow as the material, media of choice in the making of art. Lachowicz’s parody of modernist canons using layers of appropriation entail wit and humor, a parody of her own parody. Robert Hobbs in Appropriating Appropriation wrote, “Her art thus dramatizes the rapid obsolescence of artistic languages, the necessarily appropriative nature of creative activity, the decorative and emendative power of late twentieth century post-feminist feminism, and inevitability of all artists ultimately to quote themselves. In ‘abstracting the links’ Lachowicz presents a new meta-art that is as much about art’s history as it is about art’s ontology.”

German artist Karin Sander is described by Gundolf Winter upon the exhibition of The Rubens Furtherance Award of 1994. “Karin Sander’s concrete cocern in her site-and situation-related works is the communication of a feeling for volume and space, based on her irritating, sometimes ironic, sometimes poetic interventions into the given, often ordinary, construction ensembles in question. With sparest means she opens up new possibilities in what seems solid spatial constellations, to wrinkle out the latter’s hidden charms and reveal opportunities for remodeling while, in passing, she offers optical guidelines for both changes and alternatives.” Sander’s recent works of scaled full body portraits were recently exhibited at SFMoMA in Technology 010101. The subjects are scanned then recase in plastic or plaster, an exact replica in 8 inches. Exhibitions and collections include San Francisco Museum of Modern Art, Museum of Modern Art, New York, Kunstmuseum Bonn, Germany, and P.S. 1, New York.

Swiss artist Beat Zoderer connects the everyday world of ordinary objects to the plastic arts. Whether it be painting, drawing, sculpture, or installation, he uses fabric plastic, tools, techniques which he bends into a concrete construction of memory. Born in Zurich in 1955, Zoderer has made the ordinary into extraordinary using a full range of ordinary objects, i.e. file folders, hole punchers, string, plastics, discarded debris etc. Zoderer ironically and playfully reorders these pragmatic materials into concrete constructions. “Zoderer creates structural figures that balance between anti-illusionistic surface and space-related layered bodies. The geometric surface structure of the work does not become the goal of the work, but a means to another end. The more systematic the artist is in taking his measurements, cutting and stacking sheets of graph paper, braiding grids of dough and pressing them behind glass frames and forcing colored thumbtacks into arrangements at right angles, the more any objectifiable claim to order the works migh have disappears; a place is made for the presence of aesthetic constellations whose reason for being is precisely the deviation from the rule, which makes the difference the norm.”