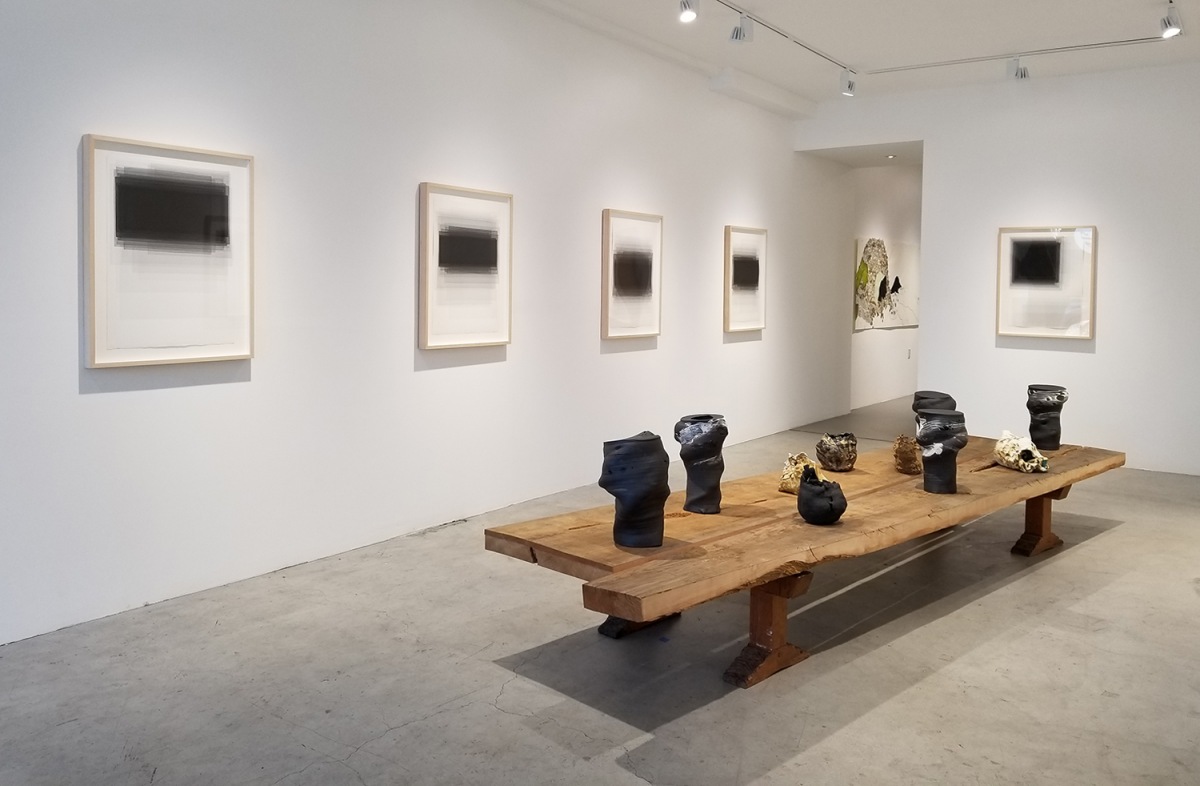 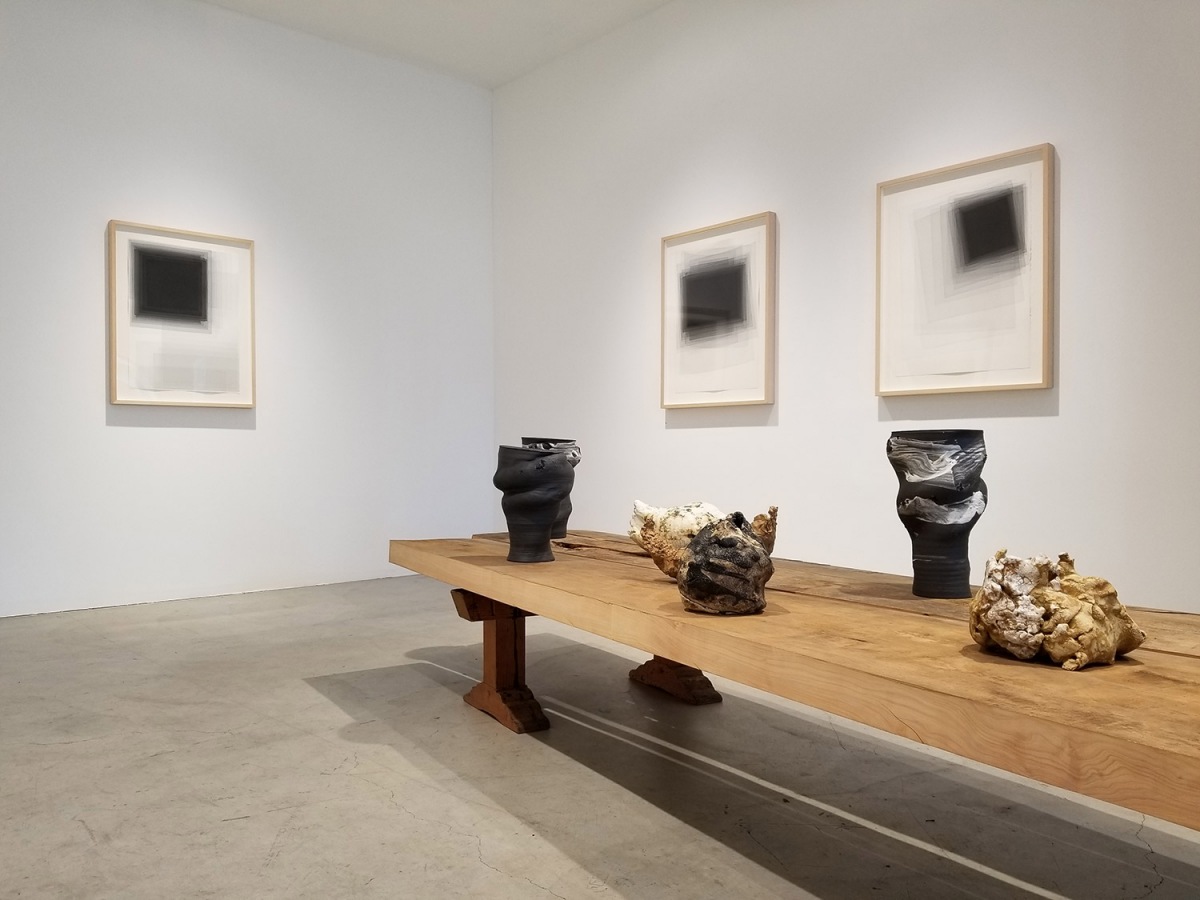 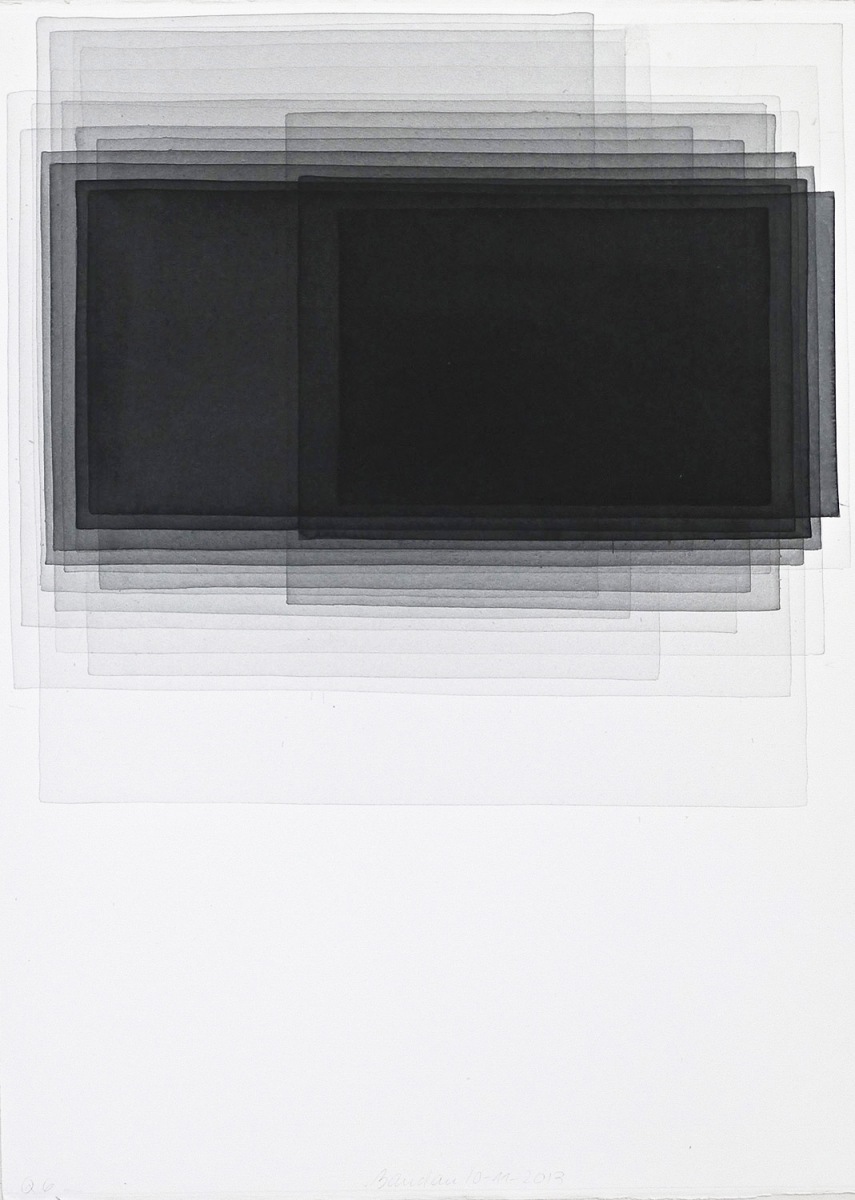 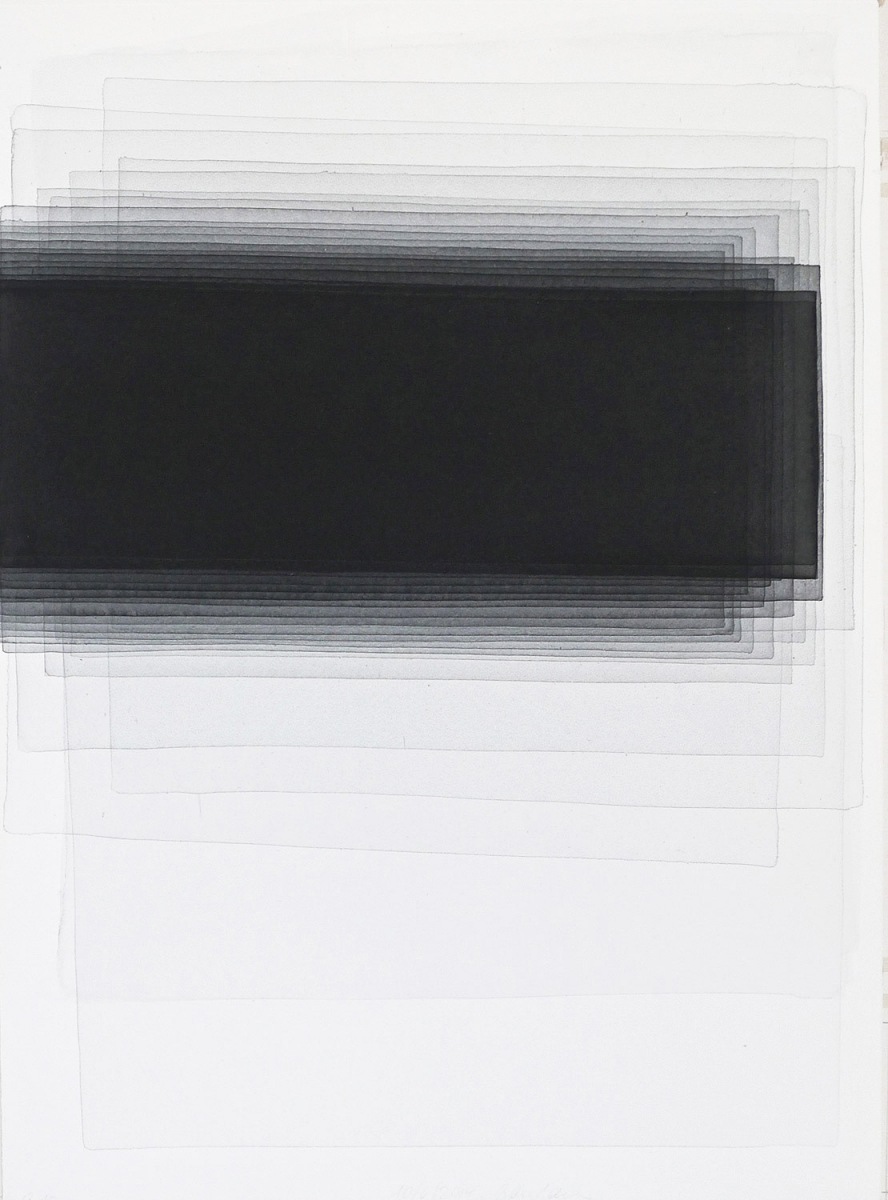 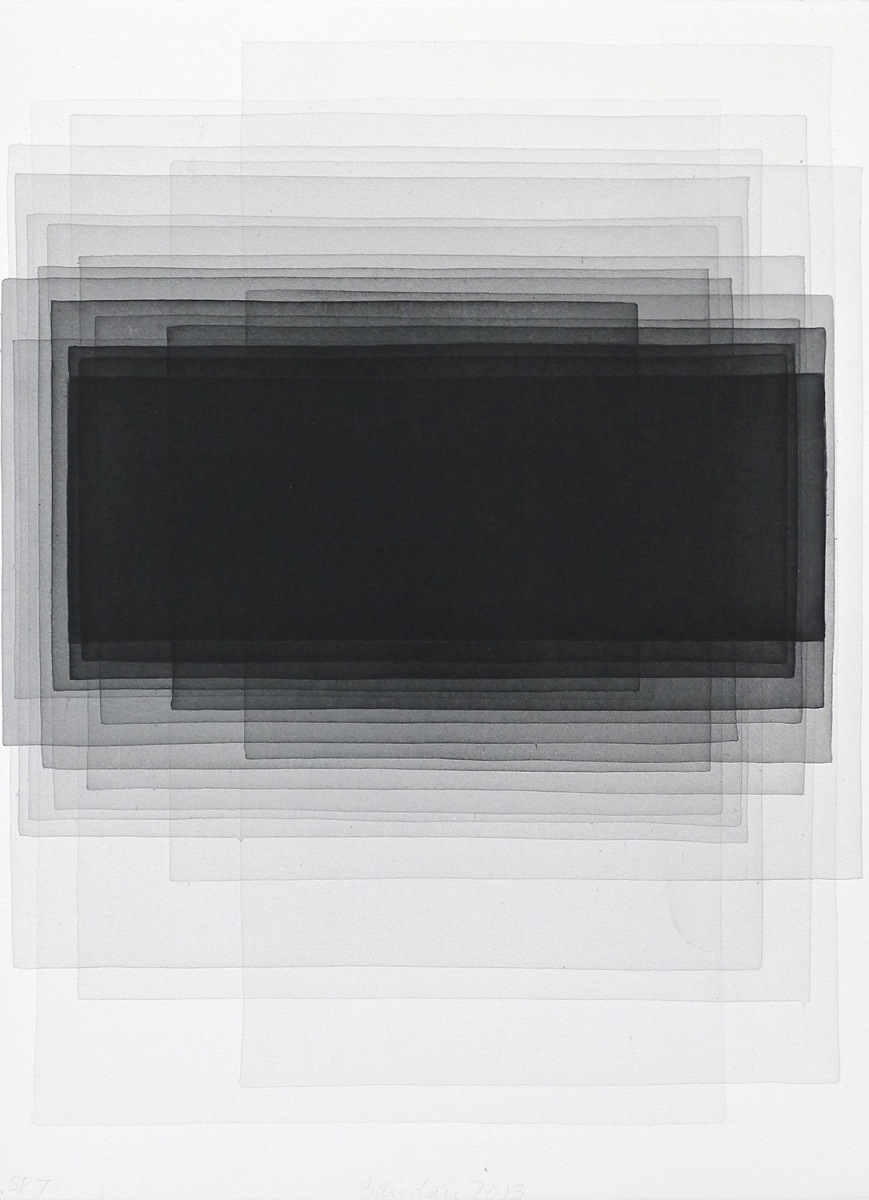 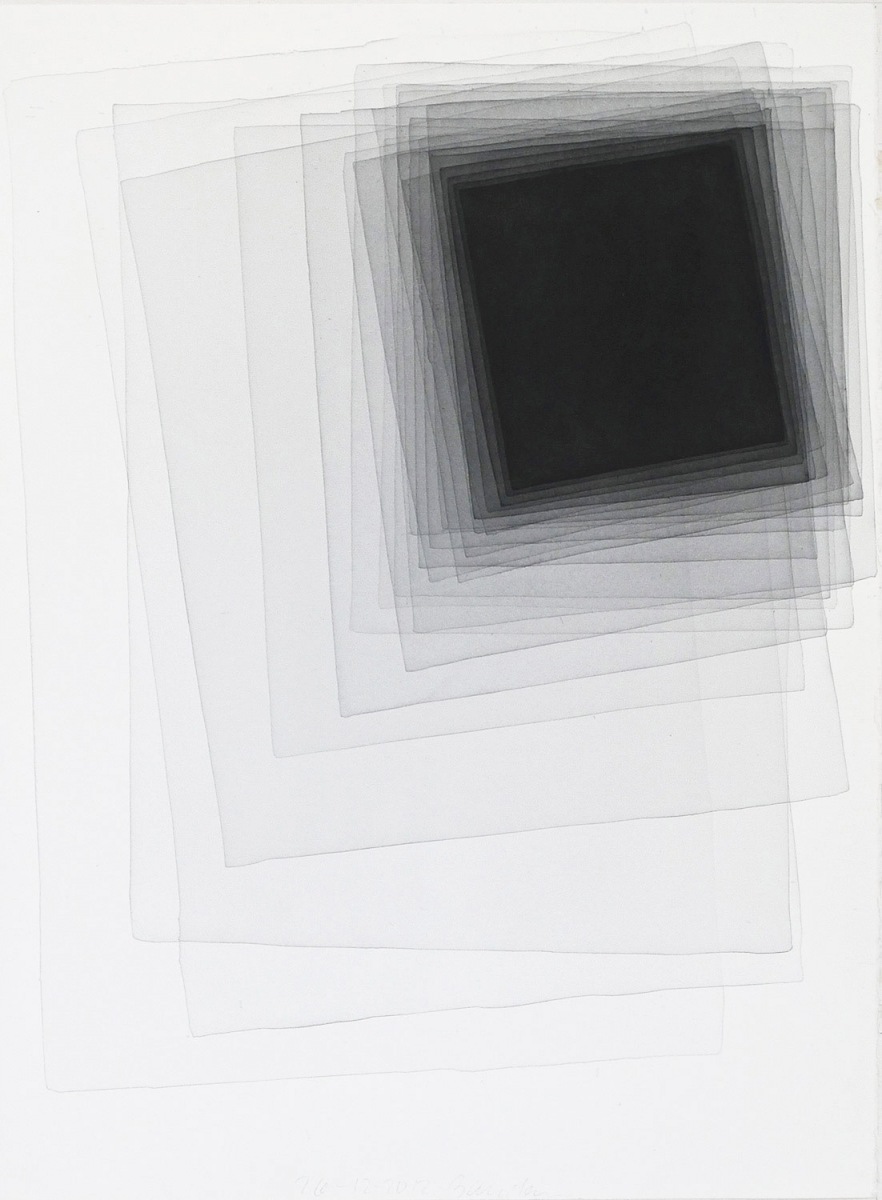 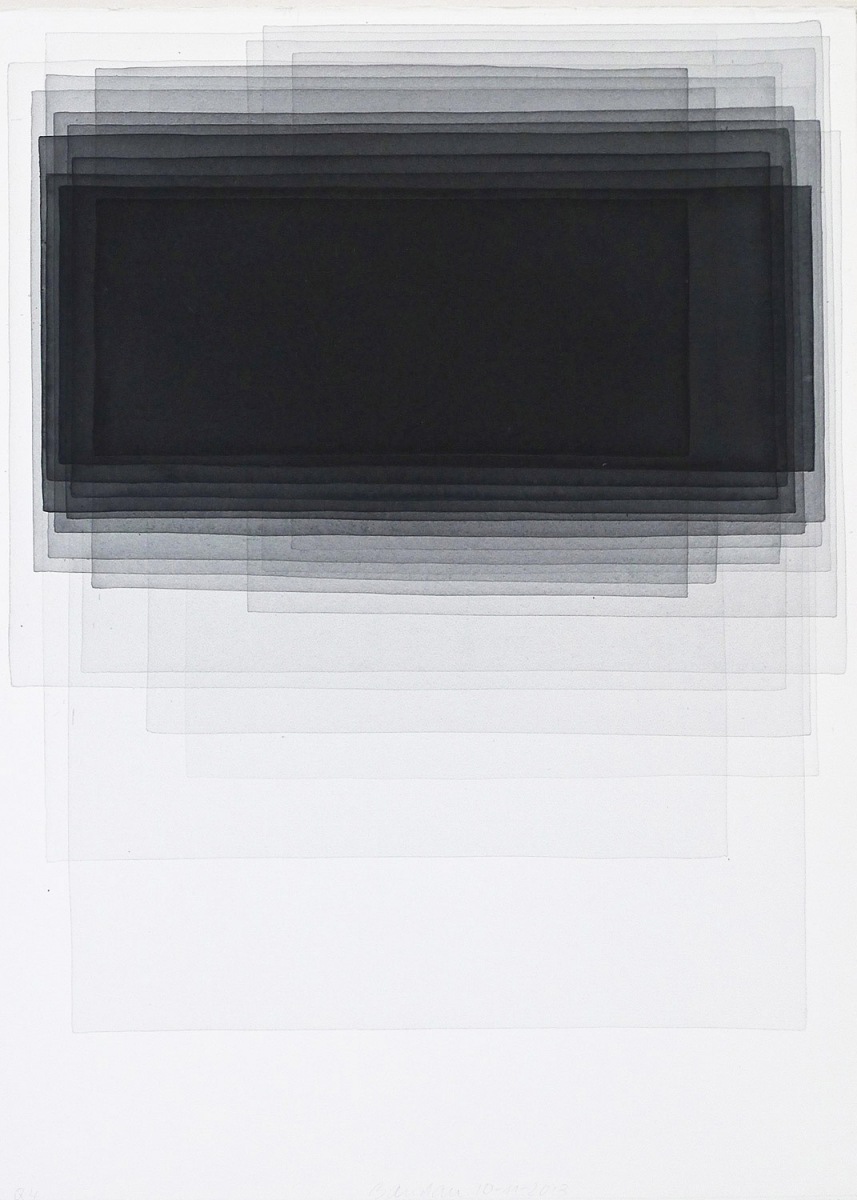 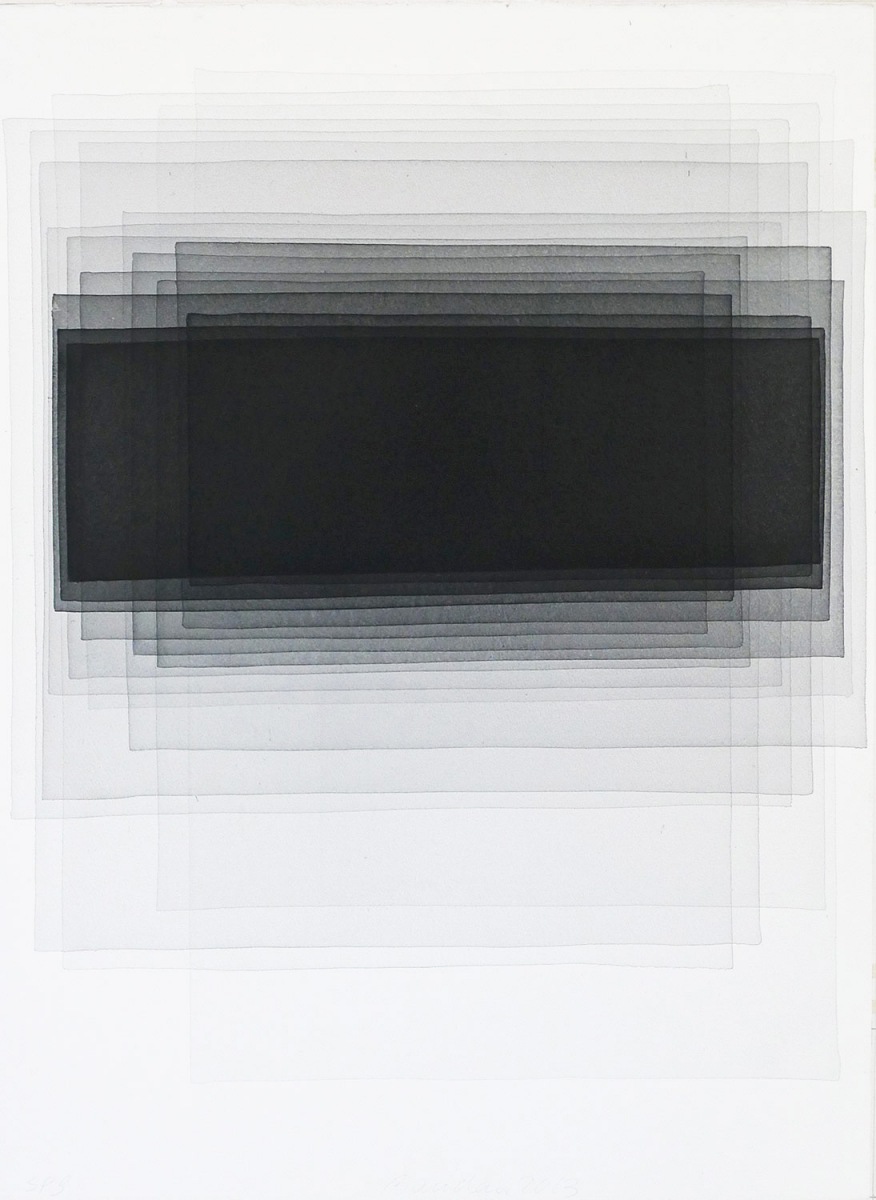 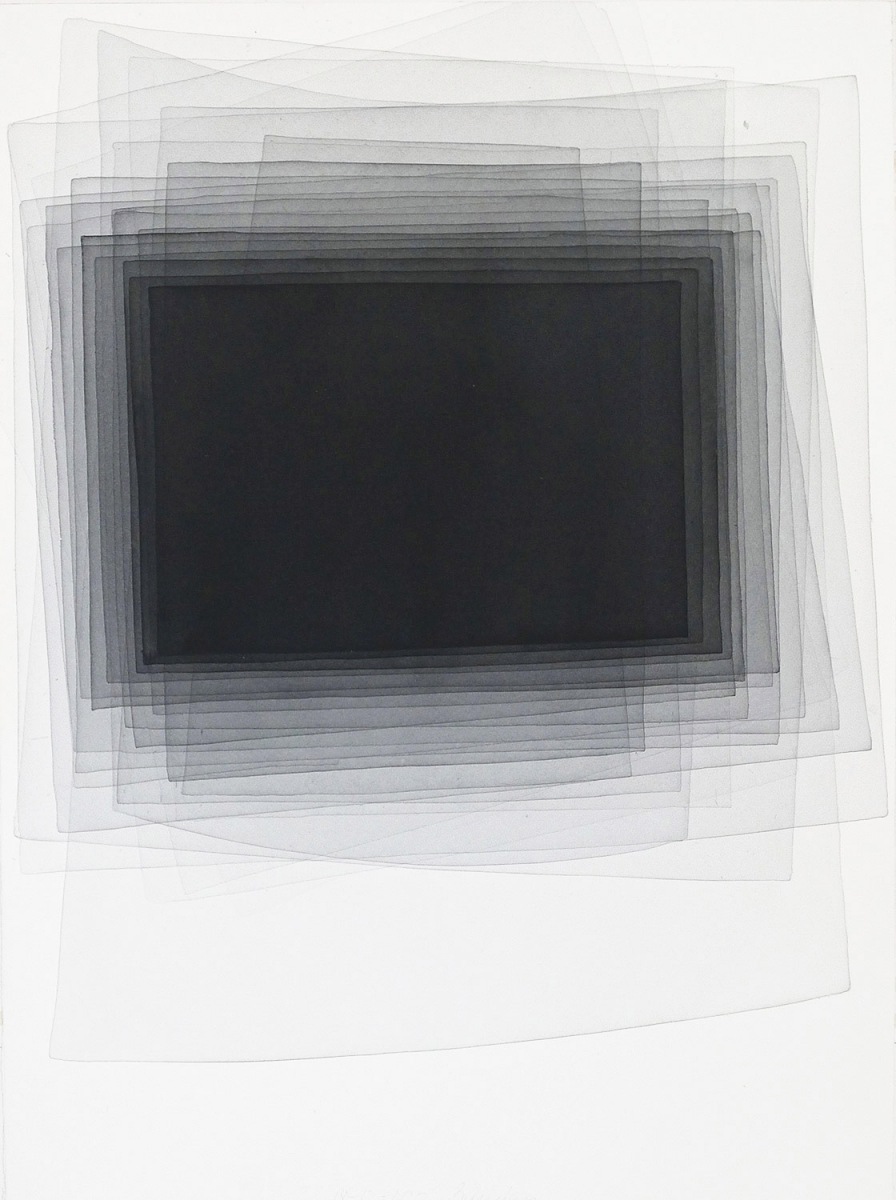 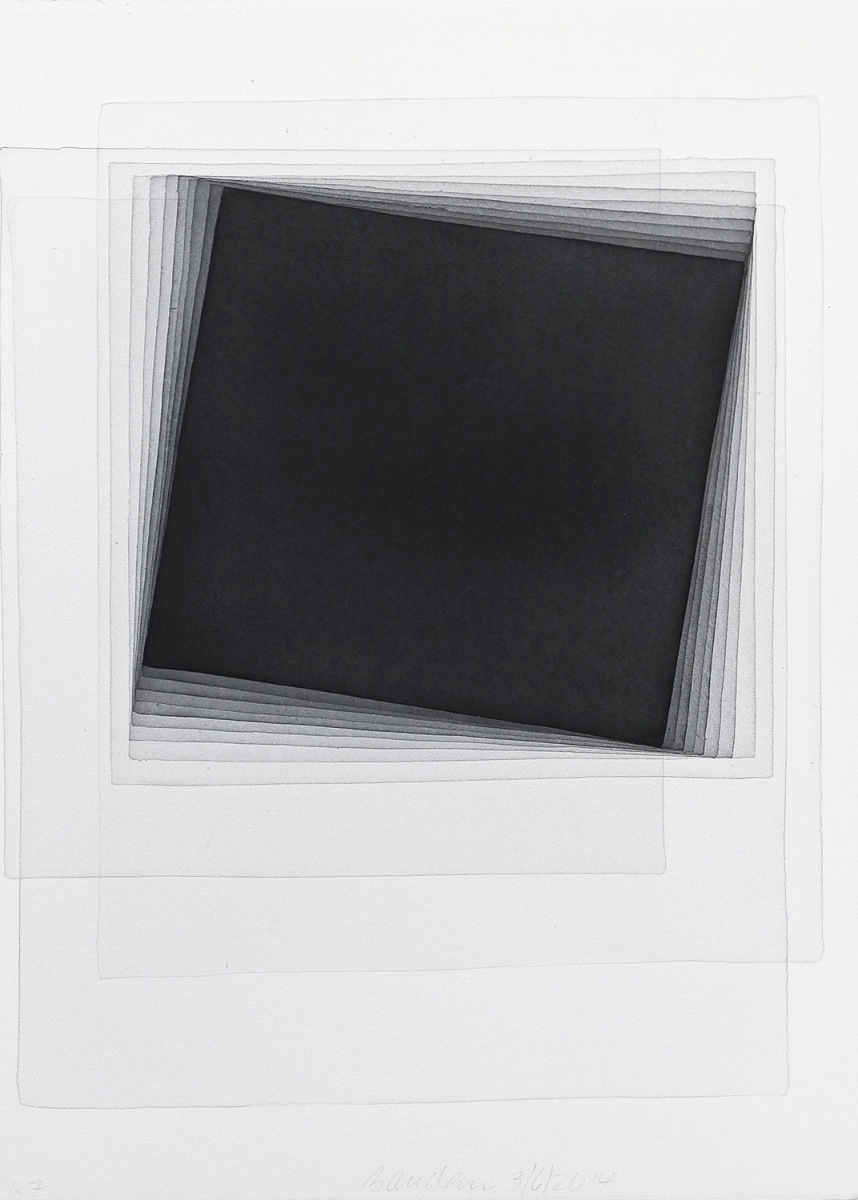 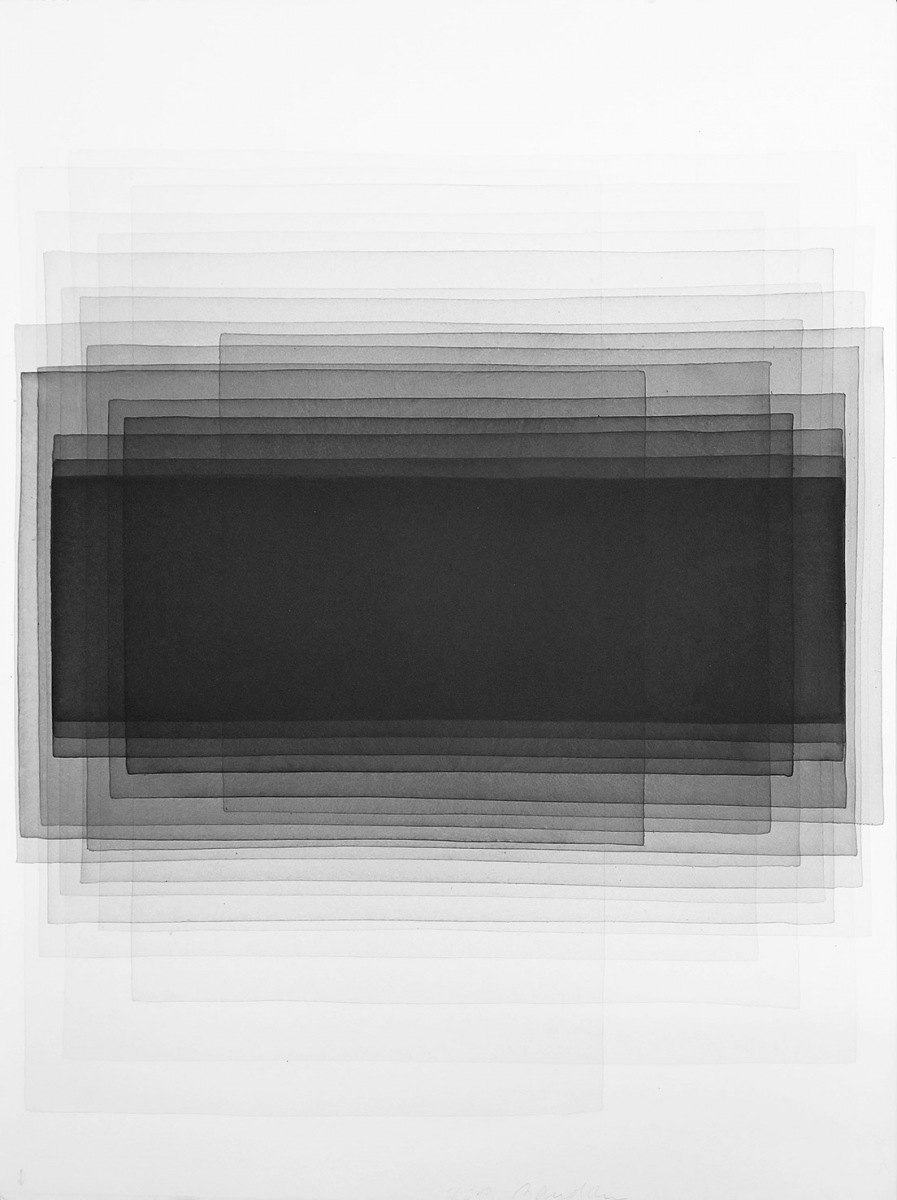 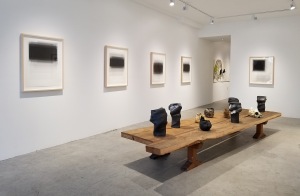 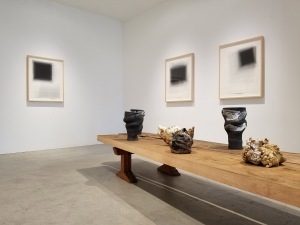 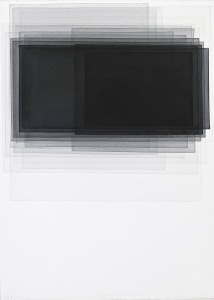 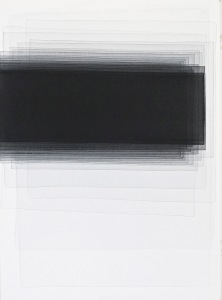 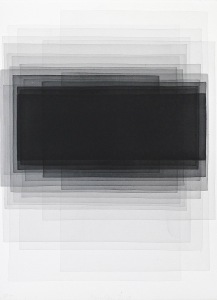 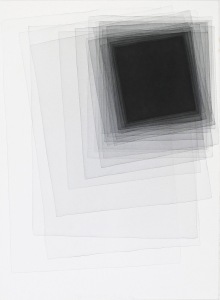 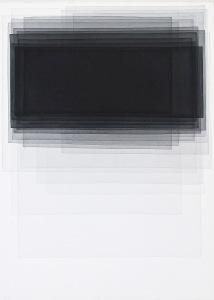 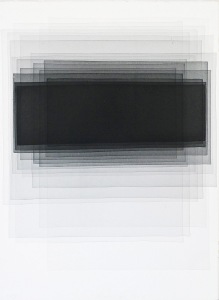 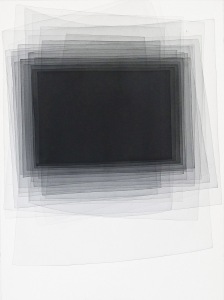 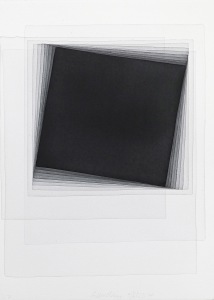 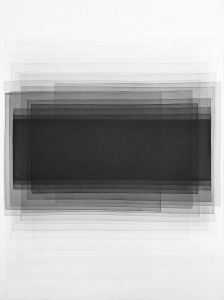 Joachim Bandau began painting black watercolors in 1983. The paintings embody the political, aesthetic and spiritual discourse of his 50-year career. Nuanced in technique and posture, Bandau’s watercolors require a lithe balance; conversely the repetitive hatched drawings of his earlier years were scarred with the memories and gravitas of the Third Reich.

Using only black pigments, Bandau starts a series of paintings with a herculean session lasting many hours, brushing layer by layer, light to dark and edge to edge. Because the paintings dry between each application of pigment, the rhythmic accretion of layers takes months, if not years to resolve. Kenneth Baker, writing for the San Francisco Chronicle, said of Bandau, “No one unfamiliar with watercolor should underestimate the feats of control that pieces such as this record. Just the right decisions regarding tools, materials and timing have to be sustained to achieve the look of effortless perfection Bandau gets.”

Whereas the technical acuity of achieving each painting is remarkable, it’s the unique visual experience that resonates. Dr. Katja Blomberg, a Berlin based art critic wrote, “Bandau stands by himself. As a sculptor he recreates shadows, objects, walls, rooms, floors, windows, gray on gray, with transparence and peace, as though from the distance of a remote state of consciousness.”

Joachim Bandau (b.1936) belongs to a protean group of German artists, along with Gerhard Richter, Joseph Beuys, and Imi Knoebel, who came out of the Kunstakademie Düsseldorf in 1961. Groundbreaking his exploration of form, in the late 70s, Bandau literally moved sculpture from above ground to underground. As with Carl Andre’s development of the floor sculpture, and Bruce Naumann’s concrete casting of the empty space under his chair, this new art form “Bodenskulptur”, Floor Sculpture, provided Bandau with an independent and important position.

For his participation in documenta 6, 1977, Bandau specified “Automobiles” (built by Mercedes Benz). Towering shapes in different human postures required a human “driver” who entered the sculpture only to be encased in a steel cocoon.  When the door shut the occupant had visibility through a small horizontal window. As the automobile began moving there were no controls available to the occupant. The structures crashed into each other, then reversed their path until the next collision. They were bumper cars loaded with the symbolism of camp deportations and the reengineering of Post WWII Germany.

In the 1980s Bandau expanded the scope of his sculpture into a lead sea, or lead field, that today are in the Ludwig Museum collections of Cologne and Aachen. Again, the hatched graphite drawings of previous decades recede and the black watercolors known today come forward. He continued to explore and define sculpture in many future exhibitions, including “Inside-Outside. An Aspect of Contemporary Sculpture”, at the M HKA in Antwerp in 1987.