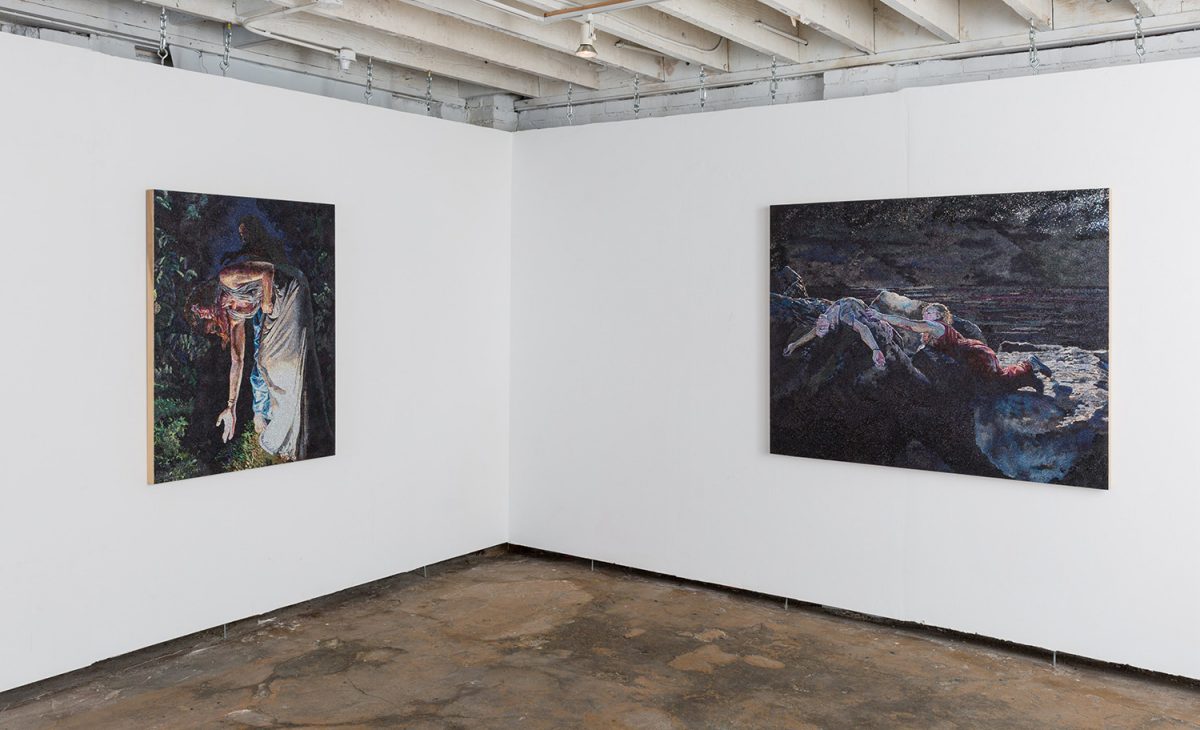 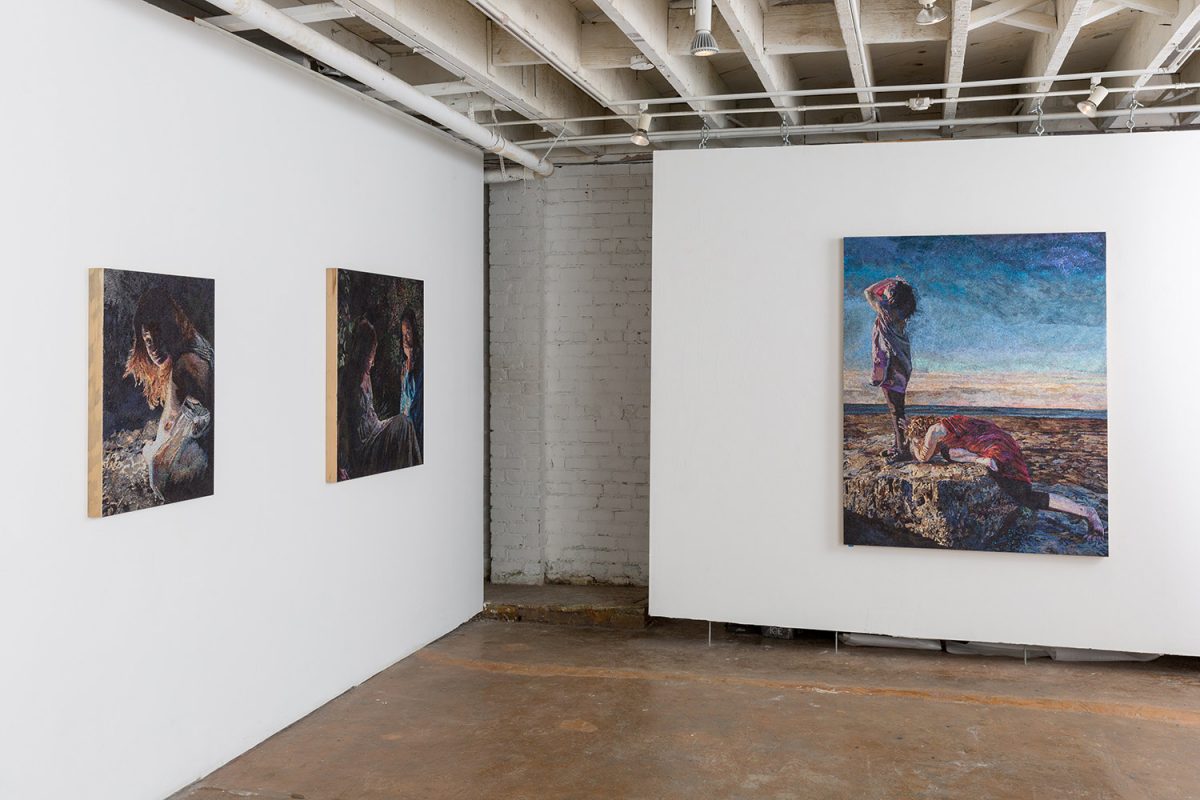 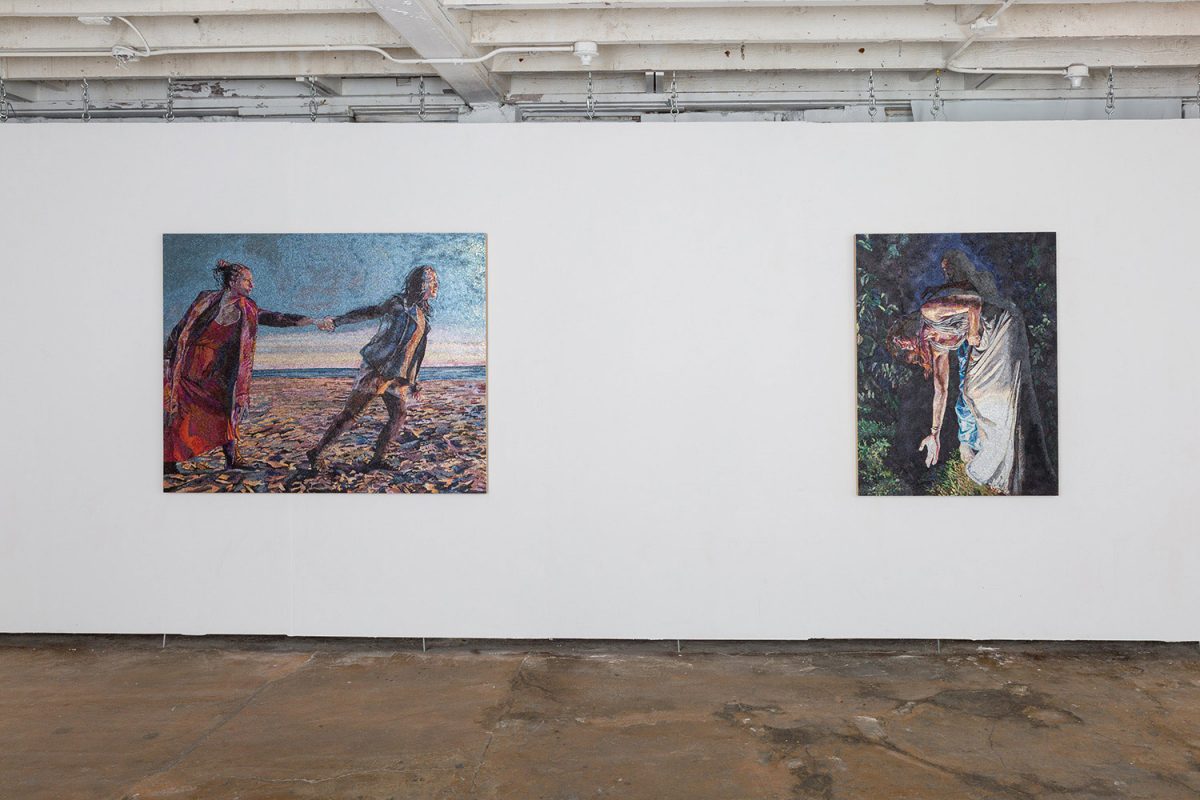 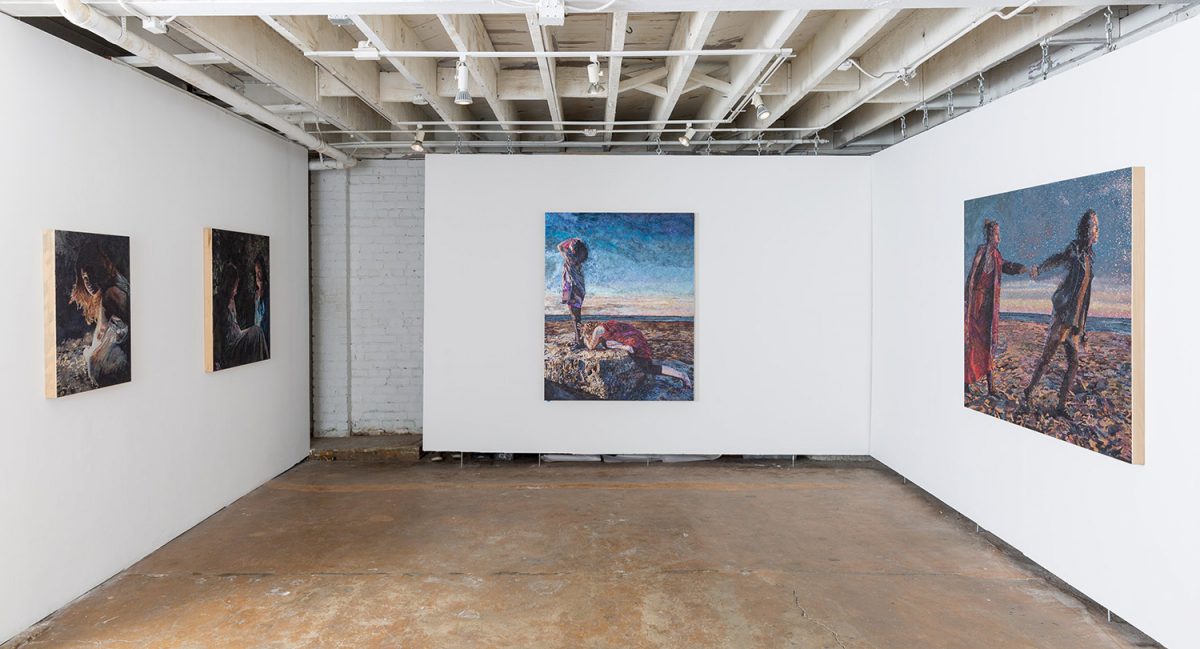 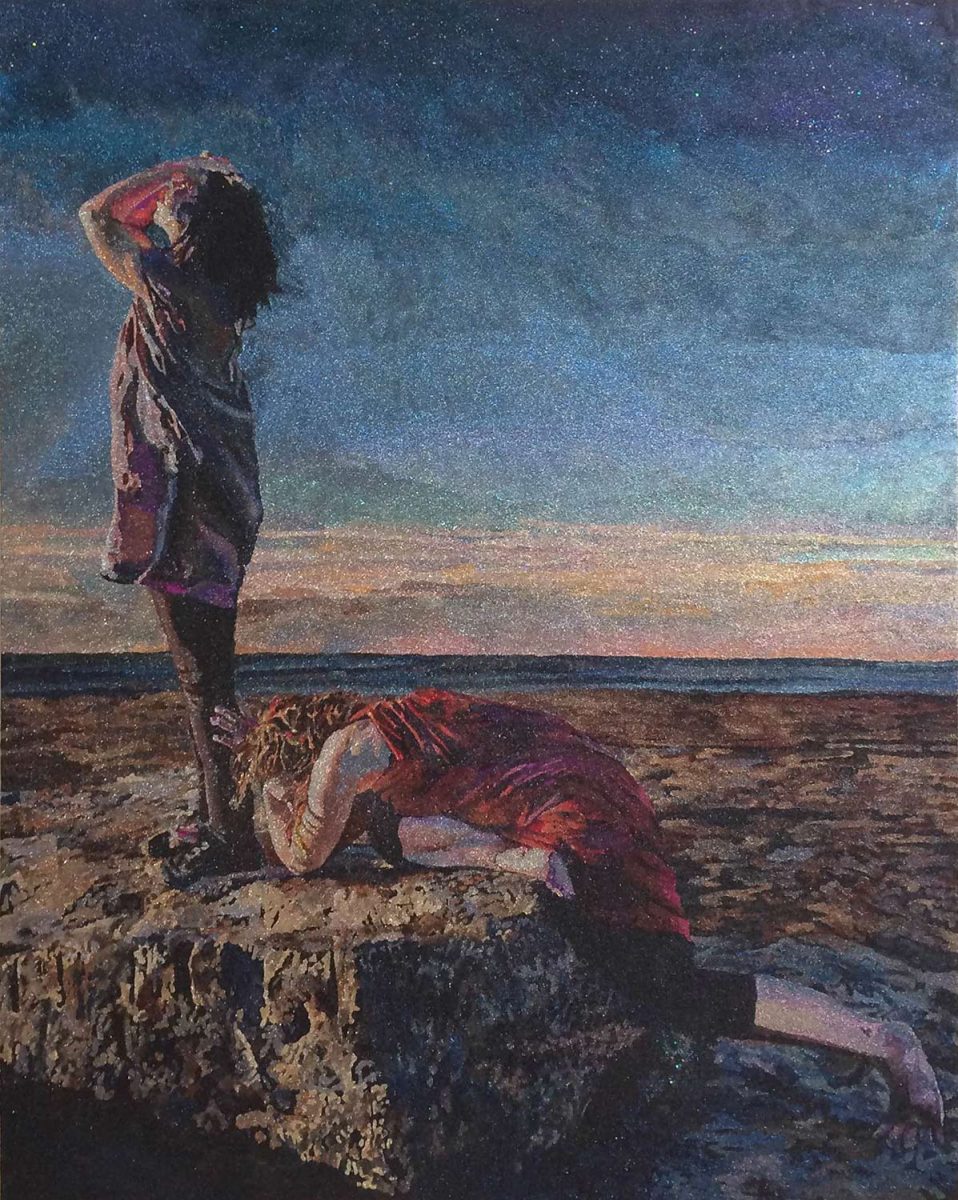 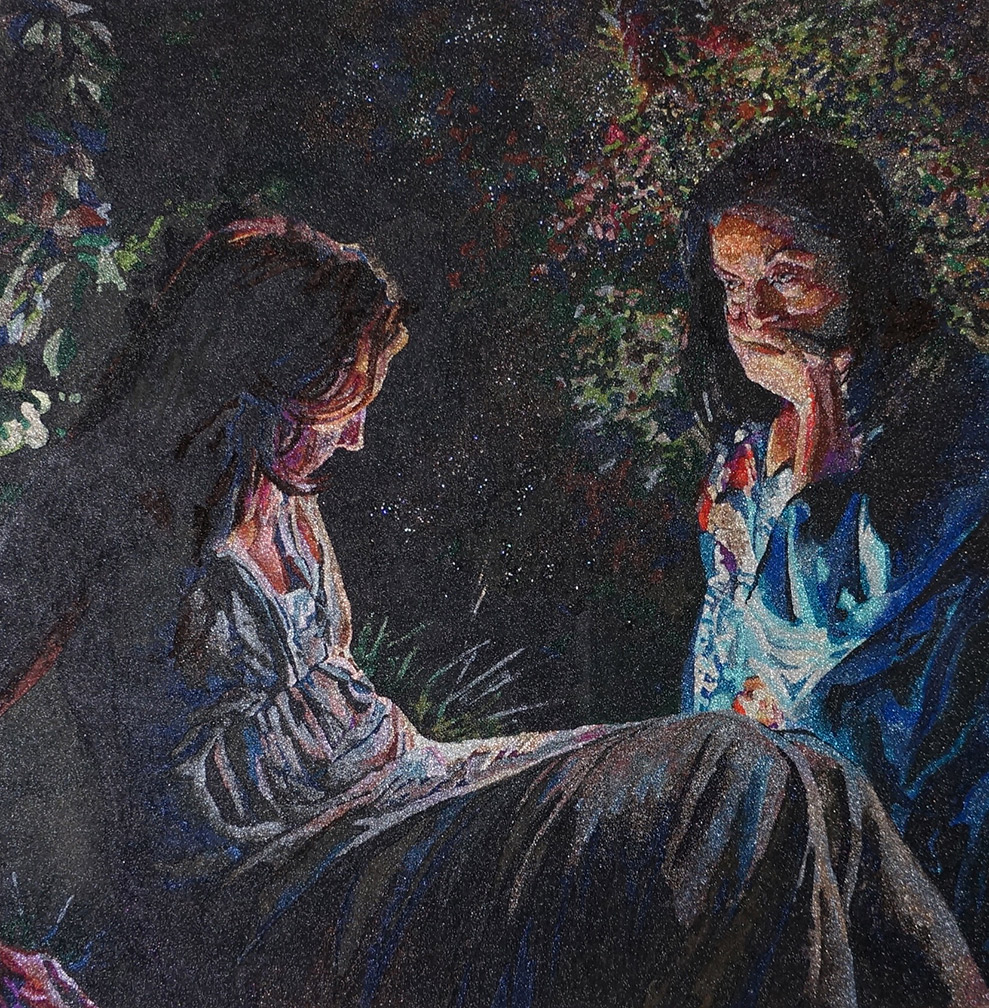 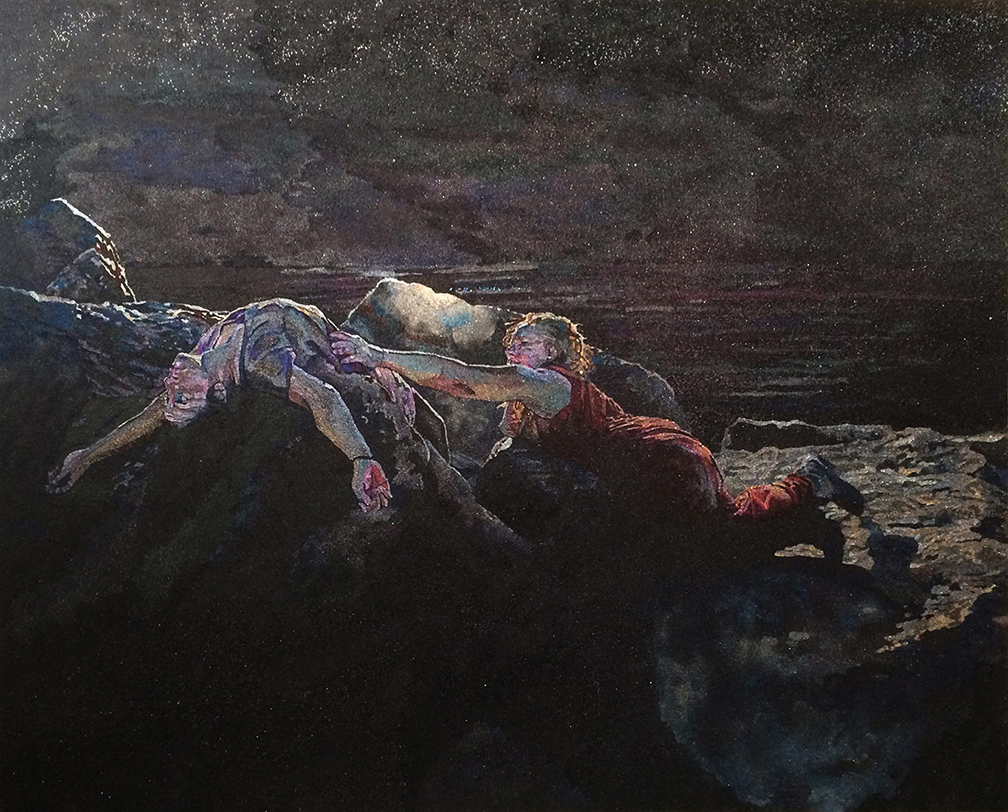 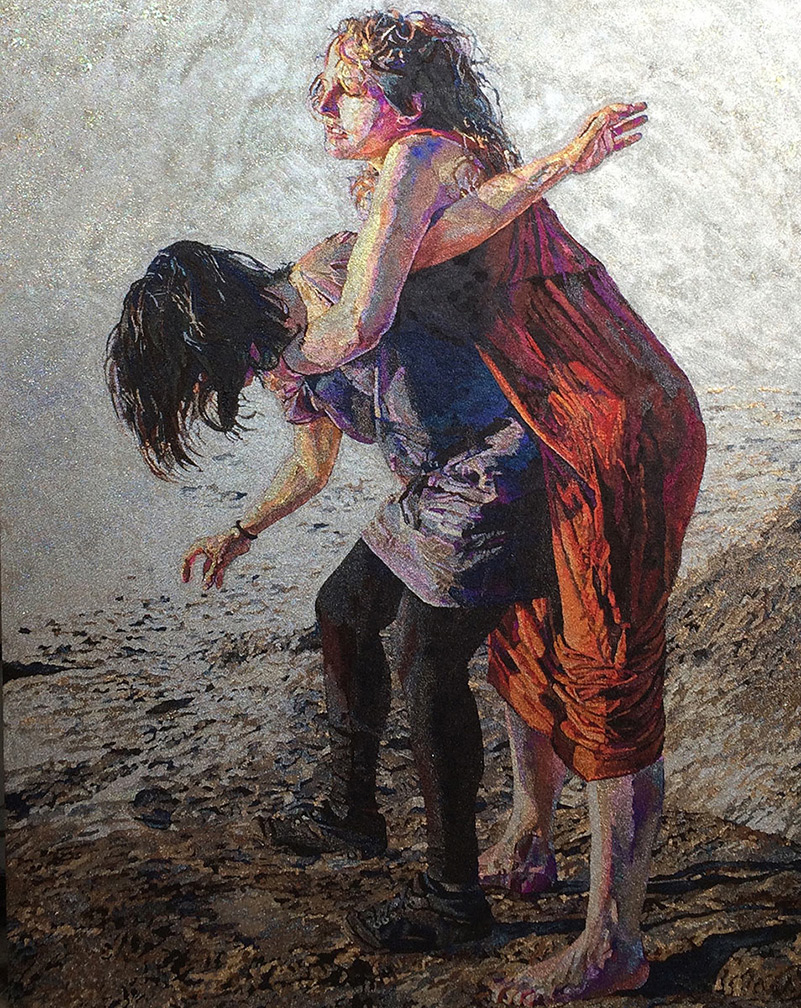 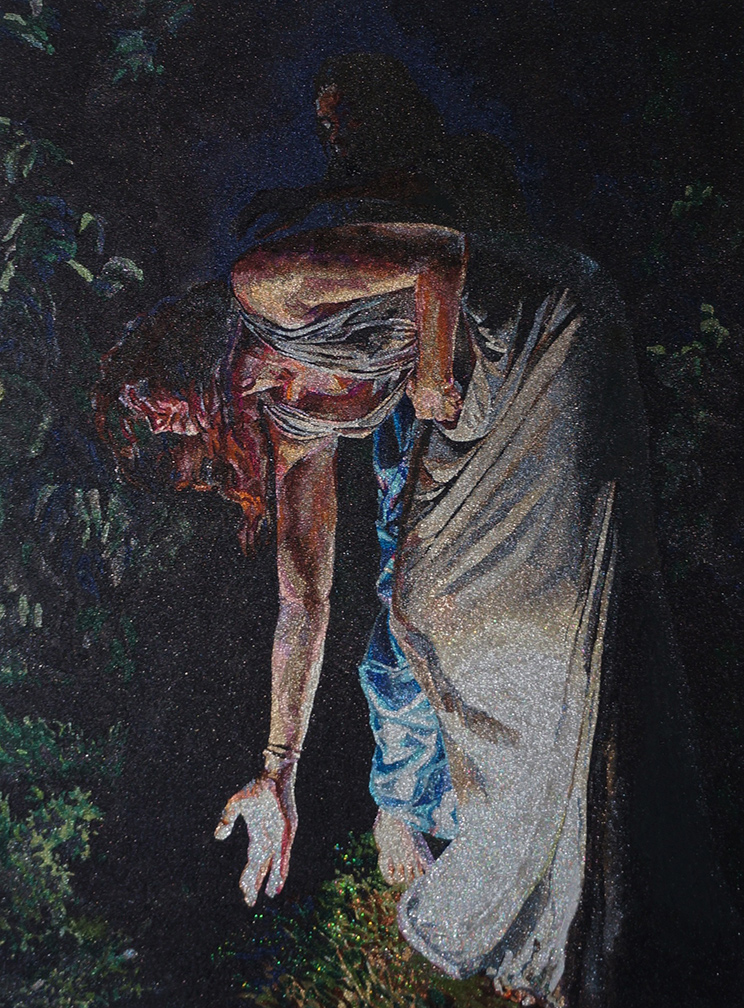 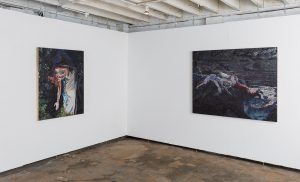 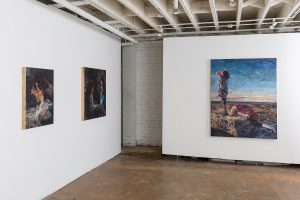 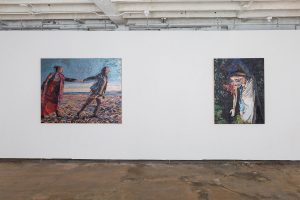 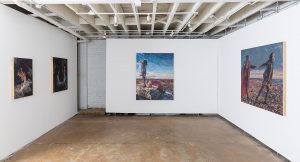 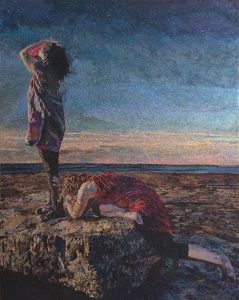 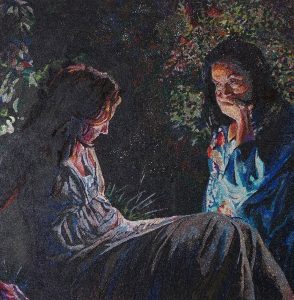 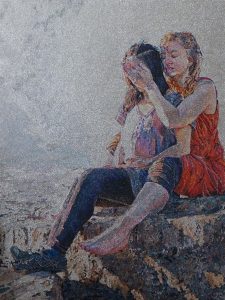 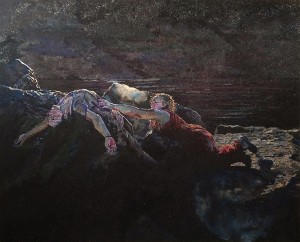 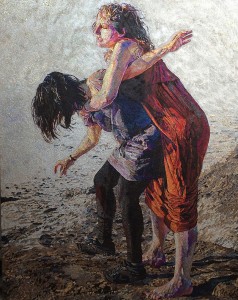 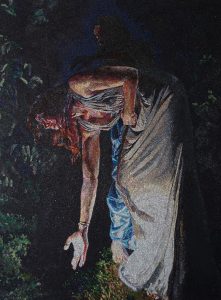 Reception: Saturday, February 11 from 3 to 6pm.

In her first exhibition Mustn’t in 2007, Vasta reframed Angela Carter’s feminist fairy tales depicting a mystical landscape where women with supernatural powers cavort in deadly play. Vasta’s second exhibition reflects the trophy portrait in glitter, this time with internet composites of adolescent females posed with their kill. Jamie Vasta then presented After Caravaggio – a contemporary reframing of Michelangelo Merisi da Caravaggio’s historic paintings. Vasta posed her coterie of friends and colleagues with props of today, turning gender and context on end. After the Hudson River School positioned Vasta’s glitter on wood landscapes in the traditions of 19th century landscape painting. True to her predilection of revisiting art history with a contemporary spin, Vasta turned her eye to the San Francisco Bay Area landscape as filtered through the lens of the Hudson River School of artists.

The current series, Eurydice is a tale of great love and loss. Offering inspiration to great luminaries throughout history such as Peter Paul Rubens and Poussin, Jamie Vasta joins these historical icons with her homage to the Greek tragedy of Orpheus and Eurydice. Orpheus, a great musician whose father was Apollo and mother Calliope, descends to the underworld hoping to resurrect his bride Eurydice, who tragically dies from the the viper’s bite on the night of their wedding.  He brings his lyre and power of song to woo the Lord of the Dead. Struck by his song the Lord allows Eurydice to ascend with Orpheus upon condition Orpheus not look back at Eurydice. As Orpheus enters daylight he turns to look at Eurydice who tragically still hovers in the dark cavern, condemning her to death forever.

From this tale of human limitations, Vasta depicts two costumed women in loose classical Mayfield Parrish like garments. The two actors enact film stills from a non-linear ghost story, playing out tableaus of grief and longing.  In the bright silver works “The Dream” and “Tempest”, the figures become islands of color and solidity in the bleak desert beach.  Scatters of prismatic glitter shoot sparks across the blown-out brilliant sky.  A tender embrace turns to obsessive clutching and restraint, the sunny day turns harsh.  In “Visitation” and “See Mystery Lights”, the loosely rendered figures emerge out of the darkness, disappearing when light reflects off the dark surface.

Jamie Vasta received her MFA from the California College of Arts in 2007. Her work has been reviewed in Art in America, Art Forum, art LTD, Modern Art Obsession, The Boston Globe, New York Times, SF Weekly, and The Bay Guardian. Vasta is included in many prestigious public and private collections, including the Berkeley Art Museum, Berkeley and the Crocker Art Museum, Sacramento.